Probably the most universal truth in the martial arts is that no one can agree on anything.

If there is an exception to this iron-clad credo— a concept on which most everyone could safely stamp their embossed seal of approval— It would be that the primary goal of any self-defense training is the ability to react without thinking in a life-threatening situation. Although each art has its own stylized blueprint for achieving this goal, the basic idea is to somehow convince the student that he really can defend himself.

For the most part, this is accomplished through the theory that the student must first master the basics and become natural with the particular style. Th

rough endless repetitions and hours of practice, the student will —somewhere down the line— become comfortable with his new-found self-defense system.

This traditional “building block” concept of instruction has indeed proven successful with students who are totally willing to invest the required time, interest and gut commitment to their art.

“The problem,” according to modern arnis founder Remy Presas, “is that many students are not ready to commit themselves so thoroughly to a self-defense program. Many people need quick results, or at least a reasonable system of rewards where they can actually see the results of their labor. This is where arnis training differs from most traditional concepts of instruction. Basically, arnis deals with the simplicity of a person’s natural movement. Instead of reprogramming a person’s natural movement to fit the art, arnis is adapted to fit the student’s natural movement. The idea here is to give the student an immediate sense of accomplishment—to give him something useful that he feels confident with. If the movement is not” natural, a person will have to stop and think, Alright, if he grabs me here I do this, but if he punches me there I do that.’ With arnis, the goal is to develop an individualized system of self-defense based on a person’s inherent physical characteristics.” 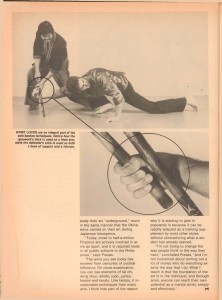 … “The arnis you see today has evolved from centuries of outside influence. On close examination you can see elements of tai chi, wing Chun, aikido, judo, jujitsu, karate and kendo. Like kempo, it incorporates techniques from many arts. I think that part of the reason why it is starting to gain in popularity is because it can be readily adapted as a training supplement by most other styles without contradicting what a student has already learned.

“I’m not trying to change the way people think or the way they train,” concluded Presas, “and I’m not concerned about turning out a lot of clones who do everything exactly the way that I do. What I teach is that the foundation of the art is in the individual, and through arnis, anyone can reach their own potential as a martial artist”.