HAPKIDO FORMS: YOU SAY THERE’S NO SUCH THING? THERE IS NOW- Even though the Korean fighting art of hapkido has no set forms, some of the art’s innovators are including forms in their training-with astonishing results, by Mike Replogle 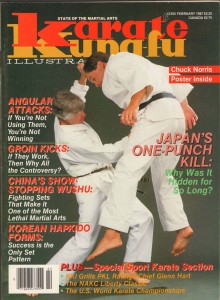 “It’s a typically warm and sunny day in Southern California, the kind that lures thousands of people to the beaches to bask in the sun. it’s definitely not the kind of day you would spend Indoors, out of the reach of those golden rays.
So It comes as a surprise to walk Into a crowded college gymnasium, with fans, friends and family calling out their encouragement, despite the debilitating heat, as competitors do their best to capture that often elusive first-place trophy.
Welcome to the world of Southern California martial arts tournaments.
Kata (forms) competitors come In all sizes, shapes and ages, each bringing his own personality and stylistic flair to the event. Hard, crisp punches and kicks; soft, flowing arm and leg movements; weapons, long and short, snap and glitter as the competitors put it all on the line for the judges’ favors.

Hapkido Forms Pioneer
Hearing his name called for black belt kata, a young competitor rises from the sidelines and strides Into the ring. Courteously approaching the judges, he presents himself with assurance and, stepping back several paces, prepares to perform his kata.
His bearing and confidence having captured the attention of audience and judges alike, he begins to flow through the movements of his form. Crisp, sharp kicks; fluid hand motions; low stances and Intense concentration Impress the audience as he fights off one unseen opponent after the other. The judges are attentive, drawn into the performance. The kata concludes, and everyone present Is aware that they have seen an exceptional performance.

What the audience Is probably not aware of is that the performance was individual, unplanned and unrehearsed. They just witnessed an Improvised kata by Fariborz Azhakh, a Southern California tournament competitor and hapkido instructor. 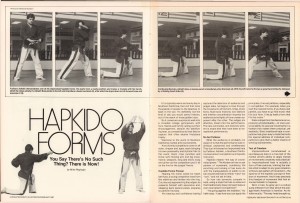